Bill Murray is at his wry, wisecracking best in this riotous romantic comedy about a weatherman caught in a personal time warp on the worst day of his life. Teamed with a relentlessly cheerful producer (Andie MacDowell) and a smart-aleck cameraman (Chris Elliott), TV weatherman Phil Connors (Bill Murray) is sent to Punxsutawney, Pennsylvania, to cover the annual Groundhog Day festivities. After a surprise blizzard traps him in small-town hell, things get even worse; Phil wakes the next morning to find it’s GROUNDHOG DAY all over again… and again… and again.
For thoughts on Groundhog Day, please check out our discussion on The Video Attic:

Video Quality
The new 30th Anniversary 4K UHD Blu-Ray of Groundhog Day offers a tremendous uptick in quality over the accompanying 15th Anniversary Blu-Ray. The film was already released on 4K UHD Blu-Ray five years ago, but I have not had the pleasure of checking out that release. From my understanding, that release is one of the more beloved ones on the format. The only noticeable difference on the video side of things with this new release is the inclusion of Dolby Vision, which can potentially tidy up encode issues in addition to more vivid colors and even more stable contrast. This 4K UHD disc offers the perfect amount of natural film grain which resolves well and never fluctuates in any unnatural way. Throughout the film you are treated to consistently excellent texture and detail within each environment thanks to this transfer. You have never seen this film look this good.
Skin tones look really natural and the clarity of the transfer gives you a great amount of subtle detail including some facial hair on some of the cast members. There is absolutely no trace of any print damage or other such blemishes that would ruin the look of this title. The improvements in contrast and overall clarity are outstanding, especially when you are exploring the various settings in the town with unique textures on the costumes. The UHD disc contains very vibrant, deep colors throughout, especially when it comes to some of the vegetation. White levels are brighter and offer a greater stability without veering into blooming in elements such as the snow. Black levels are deep and allow the picture to maintain an excellent amount of depth and detail in darker environments. This transfer is a revelation for fans of this classic comedy. Sony continues to show why they are one of the best around. 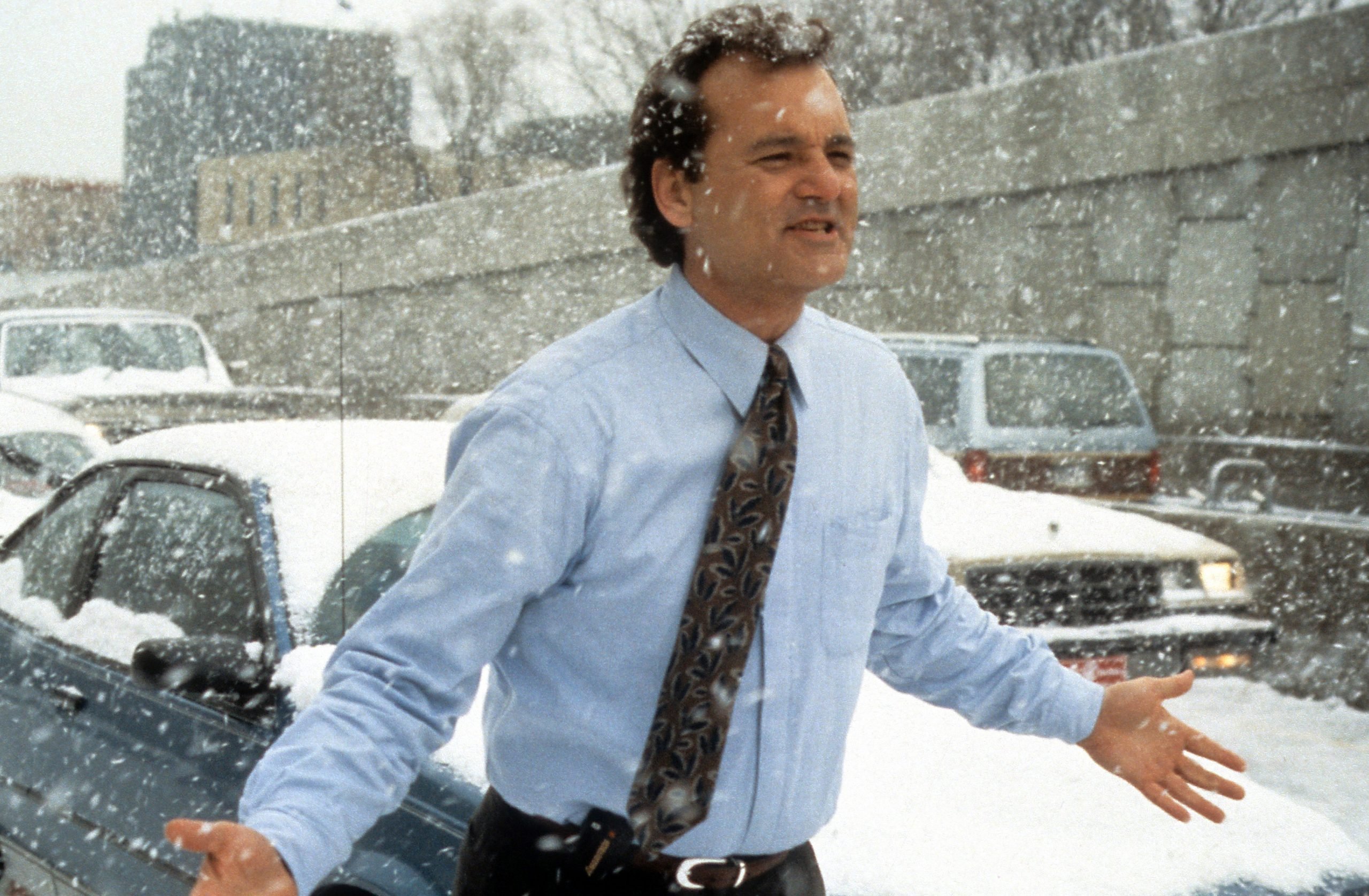 Audio Quality
The 4K UHD Blu-Ray disc brings back the previous Dolby Atmos track while also including the DTS-HD 5.1 Master Audio track and the original DTS-HD 2.0 Master Audio stereo track for the purists. The audio and subtitle options Sony provides on this disc is unlikely to displease anyone. The Atmos track does give the overall soundscape a more deeply expansive quality along with extra vitality. Dialogue usually stays anchored up front, but activity extends into the surrounds, rears and overhead speakers when it comes to the music and certain special environmental sounds to make the adventure feel more robust and dynamic. The sounds up above are not constant, but they make an impact when it makes sense. These channels really come in handy during some of the weather effects.
The film satisfies when it comes to the music, as the speakers pump in the moving score which may stir your soul a bit. Dialogue is crisp and clear without ever getting lost amongst the competing elements. The low end effects from the subwoofer are mostly engaged to provide a bit of extra texture to a few more kinetic moments. Directionality is never an issue when it comes to atmospheric effects. For those who choose to go with the original stereo track, you will be treated to a rock solid presentation which captures the original artistic intent. There are no major flaws that would indicate this track has been treated poorly over the years. Sony has treated this one well. 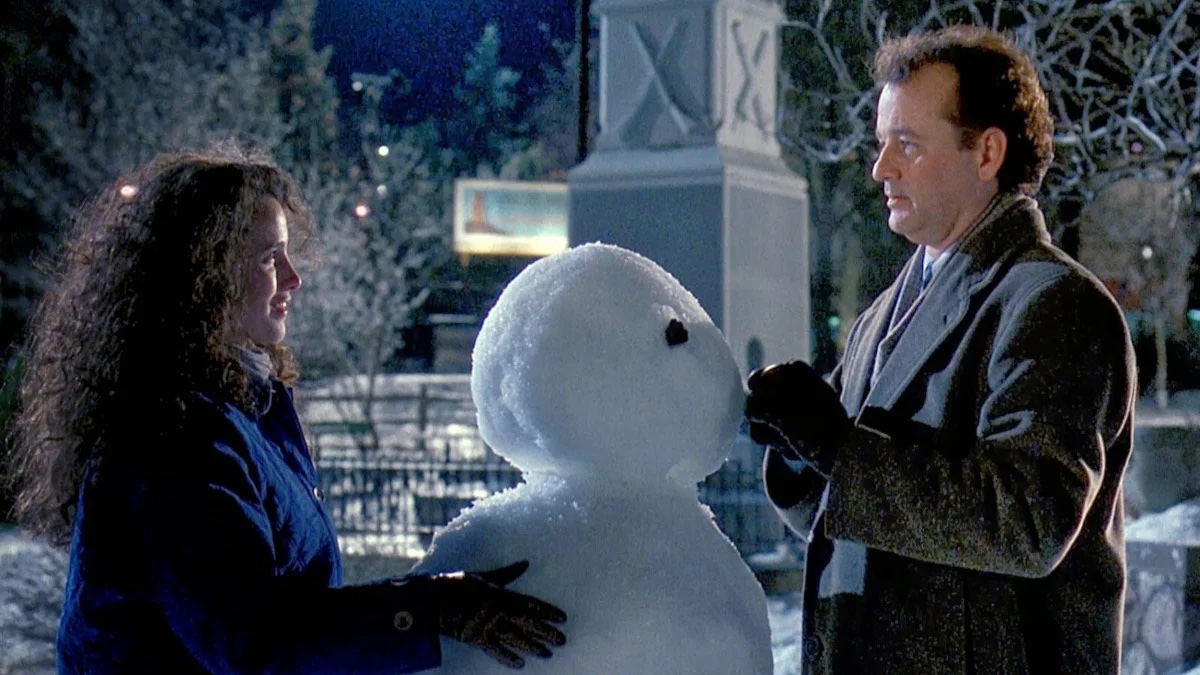 Sony has provided Groundhog Day with a sleek new SteelBook featuring artwork that is truly lovely in person. The front artwork is a depiction of Phil in the old-school clock in the middle of snow, and the rear features the groundhog bursting out of the package. The interior sports a photo of Phil riding in the car. Video of the SteelBook can be found at the top of this review.
4K UHD Blu-Ray

Final Thoughts
Groundhog Day is a comedy classic because it allows Bill Murray to tap into both his prickly curmudgeon personality along with his softer side that reminds you why you care about him. While not the first time-loop movie, this film created a shorthand which has impacted culture in a meaningful way. The trope is used to hilarious effect here, but the movie goes beyond this by having an emotional core which cements it as something truly special. Sony Pictures Home Entertainment has released a 4K UHD Blu-Ray featuring a flawless A/V presentation and some great archival special features. Fans of the film will be delighted to have this one in a can’t-miss package. Highly Recommended
Groundhog Day 30th Anniversary Edition is currently available to purchase on 4K UHD Blu-Ray and Digital.
Note: Images presented in this review are not reflective of the image quality of the 4K UHD Blu-Ray.
Disclaimer: Sony Pictures Home Entertainment has supplied a copy of this disc free of charge for review purposes. All opinions in this review are the honest reactions of the author.
Dillon is most comfortable sitting around in a theatre all day watching both big budget and independent movies.
Type above and press Enter to search. Press Esc to cancel.